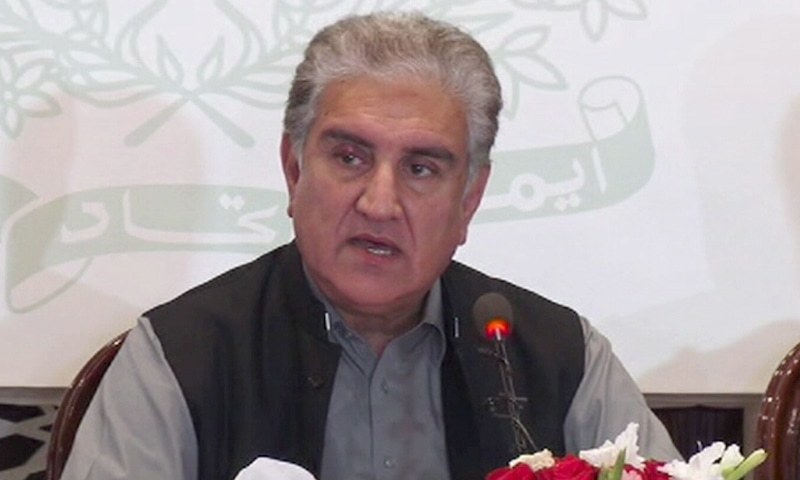 On July 14, nine Chinese nationals, two personnel of the Frontier Constabulary and as many locals, were killed and 28 others sustained injuries when a coach carrying them to an under-construction tunnel site of the 4,300-megawatt Dasu hydropower project fell into a ravine in the Upper Kohistan area after an explosion.

“We can clearly see the nexus of Afghanistan’s NDS and India’s RAW in planning and execution of the attack,” Qureshi said in a press briefing today following the conclusion of a probe into the incident.

The minister, flanked by Deputy Inspector General CTD Khyber Pakhtunkhwa, Javed Iqbal, and FO spokesperson Zahid Hafeez Chaudhri, said Pakistan kept China in the loop throughout the investigation, adding that Beijing “seems satisfied with the way we conducted the probe”.

“We found some body parts from the spot, which are of the suicide bomber and they were sent for forensic examination,” he said.

Qureshi said more than 1,000 personnel working at a nearby hydropower project were interrogated, and that it helped officials unearth “key findings”.

He said the car used in the attack was smuggled into Pakistan, and that the attackers initially wanted to target the Diamer-Bhasha dam site but settled for Dasu project site following the failure of their original plan.

The minister alleged that Afghan soil was used [for coordination] in the attack.

Regarding the Chinese sentiments on the probe, Qureshi said he had visited China for a “strategic dialogue” where the bus incident was also discussed in detail.

“China believes Pakistan has conducted the probe transparently and they (the Chinese) appear satisfied with what we have probed,” said the minister.

He said both the countries shared an understanding that such incidents should not shatter their courage.

Qureshi said some elements were strongly upset at the growing friendship between Pakistan and China as well as the latter’s “heavy investment in our country”.

He said that it has been decided to not only unveil the identities of perpetrators but also ensure that they get exemplary punishment.

Following the Dasu incident, he said, it was decided to beef up security on all Chinese projects and “revise and improve” the existing SOPs.

DIG CTD Khyber Pakhtunkhwa, Javed Iqbal said initially it had appeared to be “a blind case” to the investigators, adding that evidence collected from the crime scene had led police nowhere even after crosschecking of data from National Database Registration Authority.

Subsequently, he said, geo-fencing of the area was conducted and 12,000 cellphone numbers were analysed, while at least 90 people were interrogated but their detention did not prove helpful.

He said the breakthrough came after the vehicle used in the crime was examined and a sticker of a car showroom was found pasted on its rear side. “We found the showroom owner named Hussein in Swat who confirmed to have received the vehicle in November 2020 from Chaman border.”

He further said that the vehicle was handed over to the “execution party” on July 7 — a week before the attack.

The police official said that an Afghanistan-based man named Tariq, who is a member of Tehreek-i-Taliban Pakistan, was identified as the key suspect. He said that Tariq had taken the vehicle carrying suicide bomber to the crime scene a day before the attack. “He had then returned from the spot after doing his job,” the DIG added.

He said suspects, including Ayaz and Hussein, had been taken into custody, adding that the schemers named Tariq and Muavia were in Afghanistan and facilitated by senior NDS and RAW officials. “This process and planning had begun seven to eight months ago and these suspects had been conducting reconnaissance of the area during the period,” he said.

The DIG said the investigation identified the suicide bomber as Khalid alias Sheikh, adding that “he is not a registered Pakistani citizen”.

“We are now approaching the Afghan government through mutual legal assistance for seeking custody of suspects based in Afghanistan and we are providing them proofs of it,” he said.

The DIG also said that around 100-120 kilograms of explosives were used in the attack.