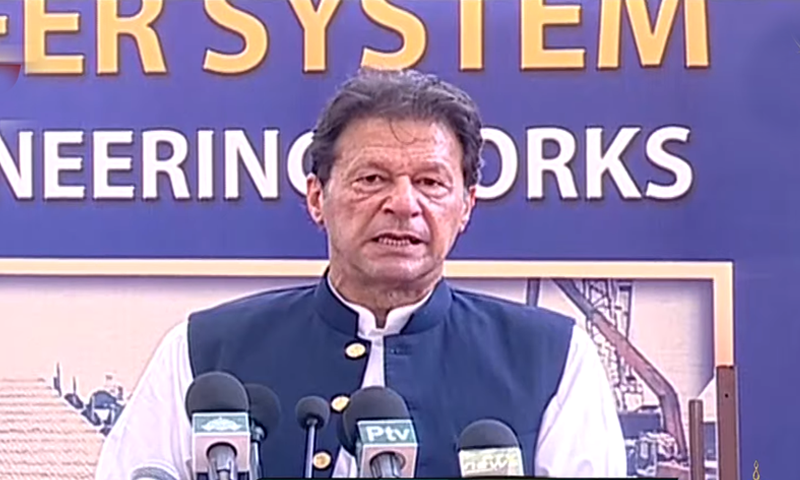 Prime Minister Imran Khan on Tuesday inaugurated the ship lift and transfer system at the Karachi Shipyard during a rare day-long visit to the port city.

The prime minister will later chair a meeting at the Karachi Port Trust (KPT) to review the Rs1.1 trillion Karachi Transformation Plan as well.

“Now we will be able to [service] 12 ships and ship lift 7,400 tonnes. This is progress. We have to save the country’s money using technology,” he said, adding that foreign exchange reserves would be saved due to the inaugurated facility being available here now,

The prime minister said that as the new system’s services developed, they could be provided to others as well and used to earn foreign exchange.

He added that the challenge ahead was the increasing pressure on the current account due to increasing economic development and outflow of dollars.

“So we will earn dollars from what you have done today and we will sell these services ahead. We have to do everything to promote our exports, encourage overseas Pakistanis to send remittances through banking channels, attract foreign investment so money comes from abroad and stop money laundering which we are completely focusing on now.”

The premier added that money laundering was the “biggest problem” of the developing world with corrupt rulers transferring money abroad.

Prime Minister Imran Khan said that apart from the above measures, import substitution was needed as well. “This is the direction of our country and we have set out on it,” he said.

The premier lamented that Pakistan had not realised its potential in the past and instead ventured on an “easy path”, becoming an import-led economy that became dependent on foreign aid.

Now, however, he was “happy that the effort is again underway to stand on our own feet”.

The prime minister’s visit to Karachi comes as his government is set to complete its three years in power and, with the next general elections just two years away, political analysts suggesting that the premier has his sight set on Sindh’s vote bank.

An important development in this regard was the appointment of former Sindh chief minister Dr Arbab Ghulam Rahim as the premier’s special assistant on Sindh affairs in July.

A month prior to his appointment as the prime minister’s aide, Rahim was quoted by The News as saying that the premier had tasked him with organising the PTI in Sindh, and that people would hear “good news” from the province in the coming days.

Moreover, a Dawn.com report had quoted government sources as saying at the time of Rahim’s appointment that Prime Minister Imran planned to hold public gatherings in Sindh starting from August and Rahim’s appointment was seen important in that context.

A day after Rahim’s appointment, Federal Minister Shah Mahmood Qureshi had shared a plan for the PTI’s campaign in the province, said a Dawn report. The report had further stated that the foreign minister had shared the plan while on a visit to Karachi and that the ruling party intended to campaign “aggressively in every town and district” of Sindh.

The same report had quoted Qureshi as saying: “Is it an anti-democracy act or against the law if the PTI comes to Sindh, meets people and invites them to join the party? Why is there so much hue and cry over this? We are not here to conquer the people but to serve them. We are here to tell the people that they have an alternative.”

More recently, days before today’s visit, Prime Minister Imran Khan had issued directives to cleanse Sindh of street crimes, lawlessness and dacoits with the help of security forces and other agencies working under the federal government.

He had given the instructions while presiding over a high-level meeting on security issues of Sindh and tasked Pakistan Rangers, Anti-Narcotics Force, Federal Investigation Agency and Pakistan Customs to conduct operations against dacoits in different parts of the province.

The premier had issued similar instructions in May, when he had directed Interior Minister Sheikh Rashid to visit Sindh and prepare a strategy to deal with the worsening law and order situation in the province.