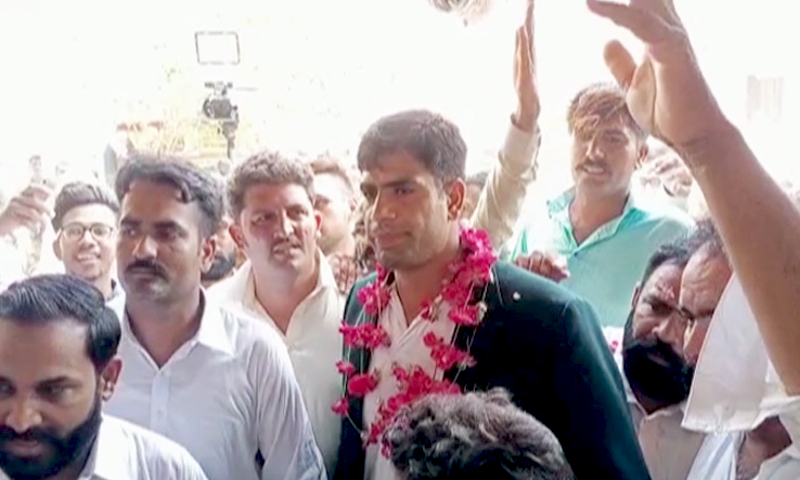 Track-and-field athlete Arshad Nadeem was given a hero’s welcome upon his return to Pakistan after finishing fifth in the men’s javelin throw event at the Tokyo Olympics.

Punjab Sports Minister Rai Taimoor Khan Bhatti and other officials received the athlete at the Lahore airport. In a tweet, the minister said that all national heroes must be appreciated.

Talking about embarking on a “new sports journey”, he said that athletes must be provided with the necessary environment so that they can make the nation proud at an international level. “The government will take all possible steps in this regard,” he said.

Video footage from outside the airport showed an emotional Nadeem greeting his mother and falling to his knees as fans and family showered him with rose petals and praise. The two embraced as bystanders and his mother comforted him.

Later, in his hometown of Mian Channu, Nadeem was welcomed by a crowd of admirers chanting his name alongside slogans of “Pakistan Zindabad”. Citizens also took photographs with the athlete.

Last week, all eyes were on Nadeem as he competed in the final of the men’s javelin throw despite having almost no support or infrastructure to train for the global event.

However, the hopes for a medal could not materialise as India’s Neeraj Chopra claimed gold, whereas Czech Republic’s Jakub Vadlejch and Vitezslav Vesely claimed silver and bronze medals.

Despite the loss, citizens were quick to laud the efforts of the athlete and congratulated him on making it to the final.

On Wednesday, a senate committee decided to honour Nadeem and weightlifter Talha Talib — who also narrowly missed out on a medal at the Olympics.

The Punjab government has also announced cash rewards of Rs1 million for Nadeem, Talib and mountaineer Shehroz Kashif for their recent stellar performances at the global level.

The man from Mian Channu

Arshad has a personal-best throw of 86.38m, which he achieved in April during his gold medal run at the Imam Raza Athletics Cup in Iran.

But it hasn’t been an easy path for the 1.87m-tall athlete, who comes from a village in a wheat and cotton-producing area of Punjab. With sons and daughters put to work early, he had little time for his first love, cricket, and facilities and proper training were scarce.

Nadeem was an exceptionally versatile athlete in his early school years. Though he dabbled in all the sports on offer in his school — cricket, badminton, football and athletics — his passion was cricket.

But after a couple of years, he had to choose between cricket and athletics. The third oldest among five brothers, he took inspiration from his elder brothers, both of whom were athletes at the divisional level, and decided to pursue athletics after a thorough discussion with his coach.

“Leaving cricket behind was not easy, but it turned out to be one of the best decisions of my life. My father was a labourer, we didn’t have the required resources or contacts to make it pro in cricket. My school’s PT [physical training] teachers Ajmal and Zafar looked after me well and helped me adjust to the change,” he told Dawn EOS last year.

In a recent interview with Geo News, his father Muhammad Ashraf said that his son did not even have a ground to practice in. According to the report, Nadeem trained in his own house’s courtyard and the streets while money for fitness machines was provided by his father.