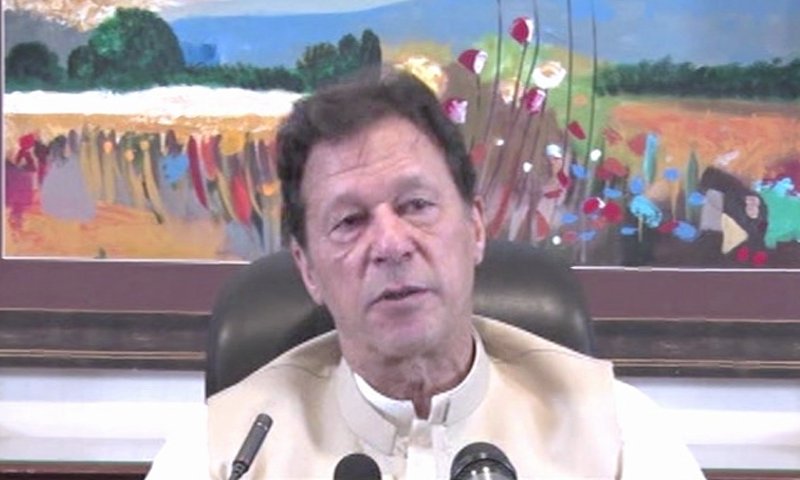 Prime Minister Imran Khan, in a wide-ranging talk with foreign journalists at his residence on Wednesday night, said he was not really “waiting” for a phone call from US President Joe Biden.

“I keep hearing that President Biden hasn’t called me. It’s his business. It’s not like I am waiting for any phone call,” he said in response to a question from a Reuters journalist.

The prime minister’s comments come days after National Security Adviser Moeed Yusuf stated that Pakistan has other options if Biden continues to ignore the country’s leadership.

“The president of the United States hasn’t spoken to the prime minister of such an important country who the US itself says is make-or-break in some cases, in some ways, in Afghanistan — we struggle to understand the signal, right?” Yusuf had told The Financial Times in an interview.

“We’ve been told every time that … [the phone call] will happen, it’s technical reasons or whatever. But frankly, people don’t believe it,” he had said. “If a phone call is a concession, if a security relationship is a concession, Pakistan has options,” he had added, refusing to elaborate.

During the interaction with the foreign media, the prime minister talked about the current situation in Afghanistan, its impact on Pakistan, and the withdrawal of US troops from the war-torn country.

“The hasty way in which the Americans left, if they wanted a political settlement then common sense dictates that [you negotiate] from a position of strength,” he said, adding that the US was now blaming Pakistan when they no longer had any leverage.

“I think the Americans have decided that India is a strategic partner. Maybe that’s why Pakistan is being treated differently. Pakistan is just considered to be useful only in the context of settling this mess.”

The premier added that Pakistan’s closeness to China was another reason for the change in the US’ attitude.

The prime minister stressed throughout the interaction that Pakistan stood to lose the most from a deterioration in the Afghan situation.

“You ask me whether we are worried? We are [definitely] worried because the direct impact of descending into a prolonged civil war […] the country that will be most affected after Afghanistan will be Pakistan.”

He explained that the Taliban were a Pakhtun-majority group and hence there would be spillover effects in Pakistan’s Pakhtun majority areas.

“It happened in 2003/2004 that our Pakhtun areas reacted to what was happening in Afghanistan and Pakistan lost 70,000 people in that because we supported the Americans.

“So there is a likelihood that we will again have problems in our Pakhtun areas,” the premier explained. He added that close to three million people had also been internally displaced from the tribal areas.

Prime Minister Imran Khan pointed out that Pakistan already housed 3 million registered Afghan refugees with more unaccounted for. “Our economy is just recovering [so] we don’t want another inflow of refugees,” he said.

Any civil war in Afghanistan would also derail Pakistan’s plans for connectivity with Central Asia and geo-economic agenda, throwing them “out the window”, the premier highlighted.

He said a “nightmare scenario” for Pakistan would be a protracted civil war in case the Taliban tried to form an exclusive Afghan government through a military takeover.

The premier explained that Afghanistan was an ethnically diverse population so if the Taliban tried to take over and one ethnic group tried to impose itself over the others, it would lead to “constant unrest and that isn’t what Pakistan wants”.

He reiterated Pakistan would be affected by that unrest.

“We have a larger Pakhtun population here in Pakistan than in Afghanistan and they’re probably the most xenophobic people on earth. They fight each other normally but when it’s an outside [force], they all get together.”

Pakistan’s entry in the US-led war on terror in 2001 led to a “civil war in the tribal areas”, the prime minister said, explaining that as a result, the militant organisations formed to wage Jihad against the Soviet Union turned against Pakistan.

“Hence it’s in Pakistan’s interest that there is a political settlement and all factions come [together to form] a government that represents everyone.”

Responding to a question on the extent of Pakistani influence over the Taliban, the premier said that even back in 2001, when Pakistan had recognised the Taliban government and was “most influential”, the group had still refused to hand over Osama bin Laden.

“So even then Pakistan’s influence was not all-encompassing.”

He said that anyone who thought Afghanistan could be controlled from outside “doesn’t understand the character of the Afghan people”, adding that the people could not be made “puppets”.

“If I was a Pakistani policymaker in the 90s, I would not have encouraged this idea of strategic depth which was Pakistan’s policy at the time.

“It is very understandable because India, seven times the size of Pakistan, was a hostile eastern neighbour and the Pakistani security setup was always worried about facing hostilities on two fronts so there was always an attempt to have a pro-Pakistan government in Afghanistan,” he said.

Prime Minister Imran Khan emphasised that attempting to influence the Afghan government would not work since the Afghan population would not accept it and any perception of being controlled from outside would lead to a loss of credibility.

“Pakistan should work with any government that is selected by the people of Afghanistan.”

Hence, the PTI government’s policy was to engage with all Afghan factions, hold no favourites and have a readiness to work whichever government comes into power.

Prime Minister Imran Khan said he had tried to persuade the senior Taliban leadership during their visit to Pakistan earlier this year to come to a political settlement but they had refused to talk to President Ashraf Ghani.

He said he had suggested an interim government in 2019 before the Afghanistan presidential election but “the Afghan government was very critical about this remark […] Once President Ghani got elected and the Taliban were excluded, it was always going to be a problem from then onwards since he insisted they talk to him while they didn’t recognise him or the elections”.

“Now the Afghan government is extremely critical about Pakistan [and] they think we have some magical powers that we will make the Taliban do whatever we want [them] to do,” the premier said, adding that the Afghan government didn’t realise that Pakistan’s leverage was “minuscule and diminished” since the American withdrawal.

He said it became extremely difficult to persuade the Taliban once the US gave a date for withdrawal and the Afghan government was now blaming Pakistan for the situation in Afghanistan.

“They somehow think Pakistan has supernatural powers [and that] we are a superpower plus which has such power that the 60,000 to 70,000 Taliban can take on 300,00 Afghan government troops with aircraft and modern weapons and somehow we have the power to make them (Taliban) win.”

The prime minister noted that the Afghan government’s posturing was aimed at bringing the US back into Afghanistan.

“They want the Americans to intervene again but they’ve been here for 20 years so what will they do now which they didn’t do in 20 years?” he questioned.

The prime minister reiterated that Pakistan had made it clear “our soil will not be used [for operations in Afghanistan] so that we again get embroiled in an Afghan civil war” and it did not want military bases in its territory.

“As far as I know after [August] 31, the Americans are going to stop all sorts of [operations], even air attacks in Afghanistan,” he said.