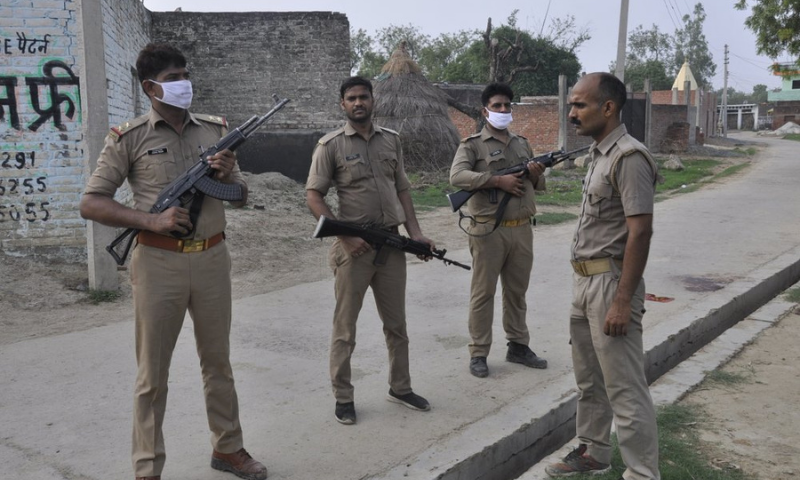 A Muslim man was beaten, paraded through a street and forced to chant “Jai Shree Ram” (Hail Lord Ram) by a mob in India’s Uttar Pradesh state on Wednesday, NDTV reported.

Video footage of the incident, circulating on social media, showed the victim — a rickshaw driver in UP’s Kanpur town — being forced to chant the slogan and begging the attackers to not beat him while his daughter clung to him. He was later handed over to the police.

The NDTV report quoted the man as saying that he was driving his rickshaw when the mob “started abusing and assaulting me and threatening to kill me and my family”.

“I got saved because of the police,” he added.

The report further stated that the incident took place less than a kilometre away from an intersection where a right-wing group — Bajrang Dal — held a meeting earlier in the day in which people complained that Muslims in the area were “trying to convert a Hindu girl”.

The assault happened right after the meeting, the NDTV report stated. However, it noted, the police have not confirmed whether the attackers were affiliated with the Bajrang Dal.

Meanwhile, the police said a case was registered against a resident of the area, his son and around 10 other people based on the complaint of the victim.

The victim — a 45-year-old man — was related to a Muslim family in the area who were involved in a legal dispute with their Hindu neighbours, according to the NDTV report.

The report also said that the two families had lodged complaints against each other at a local police station last month. The Muslim family had filed the complaint first over “assault and criminal intimidation”.

Later, the Hindu family also filed a complaint, alleging “assault with the intent to outrage the modesty of a woman”, the report added.

There have been several incidents of violence against Muslims in India in the past with some of them related to cow vigilantism.

Earlier this year, a Muslim boy was beaten in Ghaziabad district for entering and drinking water from a Hindu temple.

The 14-year-old boy had entered the temple to drink water when he was noticed by the temple caretaker who proceeded to beat the boy, the boy’s family had said.